Bhagat Singh Bedi
Canada
I am apart-time artist and I intend to paint the amazing Sikh history which we are all part of. I do my research to make sure the painting is authentic and try my best to accurately depict historic events.

Machhiwara was supposed to done by January, and was set to be released on Jan 5. At that point I had recieved the constructive criticism, I had asked for and I got back to work. Took a couple of weeks to straighten out the setting and composition, and so the painting was delayed.
But now that it is out... Happy late Guru purab to everyone!! :P

So, what's next? Well, I have no plans on working on any painting till summer. But when I do get started, Akali Phula Singh is next. It is a along awaited painting, and I have been aching to get to it!

So what is Machhiwara, what is it about?
Well, after being attacked several times by the Mughal Emperor, Aurangzeb's army, Guru Gobind Singh ji is forced to flee from the Anandpur fort to Chamkaur. During the escape, the weather was insane, and it flooded the river, Sirsa, that Guru Sahib had to cross. In the chaos, his mother and younger sahibzaadey's are separated from him, and are eventually doomed in the false courts of Sirhind.
As Guru Sahib takes shelter in a haveli in Chamkaur, he is again attacked by the Mughal forces. This time his older sons fall in the intense battle that takes place. Odds were stacked aagainst him, Guru Sahib had to flee once again. This time he had nothing left all his devotees had been martyred, and his family was lost. The great cause he was fighting for seemed to be slipping away from his grip. However, as Guru Gobind Singh ji meditates in Machhiwara, he keeps himself in the highest of spirits. Exhausted from warfare, he rests here overnight, and is eventually saved by his Muslim devotees in the morning.

Machhiwara, undoubtly, is a symbolic painting. Everything around Guru Sahib symbolizes his chardi kala attitude, and the rise of Khalsa. 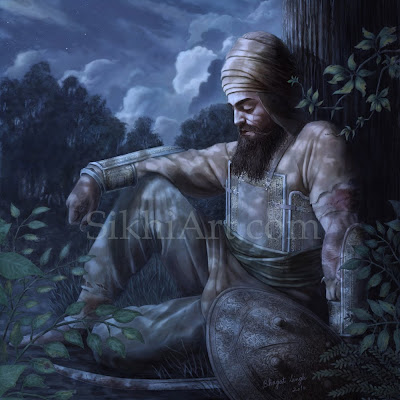 brother! i'm ashamed for discovering you only now, amazinggggg work..trust me ur bookmarked, not losin you

I got your work's direct link to it, but the admin (https://www.facebook.com/sunnysinghbagga) just wouldn't remove it.
I tried my best :|

As for facebook, the admin used the image probably because it had no watermark. However they linked to my website and I am fine with that.

Thanks again; I appreciate the effort.